Currently, sailing through the locks of the Gabčíkovo Waterworks is cyclically interrupted due to upgrading works under the water. Since Monday, October 19th, 2020, navigation via the left lock chamber of the Gabčíkovo Waterworks will be modified as per conclusions of other negotiations with Danube transport companies (complex innovation and upgrading works are running in the right lock chamber, the navigation is thus enabled in the left lock only). The closure will be reduced by an hour daily. It means that navigation will be interrupted between 9 a.m. and 5 p.m. The partial restriction will also apply on week-ends. Sailing through the left lock will be allowed daily from 5 p.m. to 9 a.m. and daily as usually from December 19th, 2020 to January 3rd, 2021.

Temporary restrictions for lock chambers of the Gabčíkovo Waterworks were modified according to conclusions of negotiations among the Ministry of Transport and Construction of the Slovak Republic (MTC of the SR), VODOHOSPODÁRSKA VÝSTAVBA, ŠTÁTNY PODNIK (VV, š. p.), a general supplier of upgrading works and representatives of transportation companies (European Barge Union, Main Shipping Corporation, Koninklijke BLN-Schuttevaer and Danu-Transport). Due to the expansion of construction works on weekends, VV, š. p., and MTC of the SR will strive to ensure that the partial limitation of navigation will be terminated at an earlier date. Information on the progress of the construction work will continue to be consulted with the partners and will be made public in the second half of November.

Cyclical interruptions of navigation are necessary to ensure the security of workers performing highly professional works on subsoil and seepage renovation on the intake structure of the both lock chambers. Sealing expension joints of the intake structure is made by divers and is a precondition for the success of the European project “Upgrade of Gabčíkovo Locks” aiming at increasing security and intensity of water transport, sustainability of the project´s contribution and smooth navigation in the next years. Should the complete works on subsoil of the intake structure be finished not in a timely manner, navigation could be suspended for the period exceeding the current three months of restrictions. VV, š. p. cannot under takesuch risk and is grateful to European shipping companies for their patience.

„Effective and efficient sealing expension joints of the intake structure is absolutely necessary for subsoil stabilisation. Moreover, it will significantly influence the further undisturbed operation of the Gabčíkovo level. It is necessary to perform this part of the project both in a safe manner and high quality,“ said Vladimír Kollár, Director General of VV, š. p. 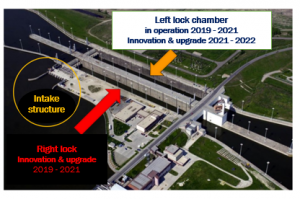 To implement the description of the subject matter of the contract, the contractor of upgrading works has proven that it is necessary to prevent inflow of water from the supply channel. Inflow of water in the subsoil was identified through the intake structure of the lock chambers.  The intake structure must be thus renovated at first. The second step is to stabilise the subsoil under the lock chambers. The underwater intake structure can only be sealed by divers. The selected technological procedure must be carried out in the calm water, i. e. without a stream which occurs when the locks are filled (when a lock is filled, high water peak of 700 m3.s-1  flows through the intake structure; for comparison only – the average flow of our longest river is approx. 200 m3.s-1). Due to the fact that the intake structure is used for filling both, the right and the left lock chamber, it is necessary to suspend navigation for eight

Divers carry out highly demanding works approx. 15 to 25 m under the level of the Danube water and under weak and bad visibility. To ensure the safety of the divers, all necessary measures are implemented und all strict standards secured, including suspension of works under unfavourable climatic conditions.

Reconstruction of expension joints means not only their sealing but also cleansing and renovation. Should be the joint not renovated after cleansing, its surface could be damaged again, e.g. by adhesive mussels or deposition of sediments when the left lock is filled.

Special measurements have proven that the intake structure should be reconstructed by the verified technology – joints will be sealed by rubber bands resistant against future expansion warpage of constructions.

Based on special geophysical measurements (made by professionals from the Geotechnics Department of the Slovak University of Technology in Bratislava in a cooperation with geophycists of VV, š. p.), detailed surveys and field injections probes, it was found that an injection mix, which has been used so far and which was planned in the project, is not sufficient, but the complex solution for the source of seepage is required. In the site of intake construction, expension joints will be fixed with sealing rubber bands. They will be tightened to concrete constructions by rustles sheet along the length and width. This procedure was designed by the principal planning engineer of innovation and upgrade of the lock chambers of the Gabčíkovo Waterworks and VV, š. p. agreed to it. Should be the newly found fact be not sufficiently considered, sands from the gravel underlay would be rewashed and deposited to the most sensitive places of the lock chambers and soaks would reduce, even disable renovative effects of injection works. Renovation of subsoil of the locks would become thus unsuccessful and constant seepage would endanger security of the intake structure and both locks. 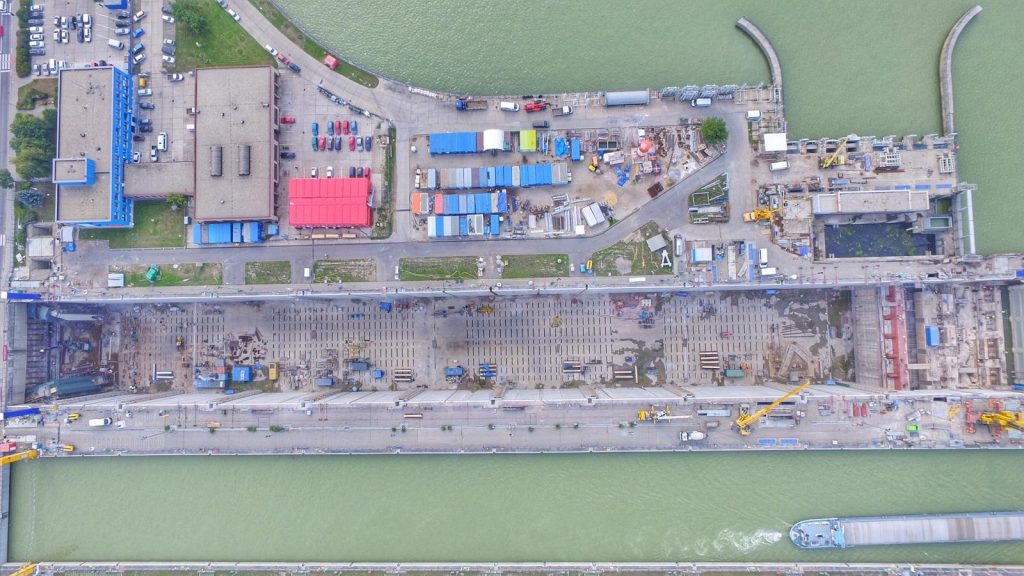 Besides underlay stabilisation, the key activities carried out under the project “Upgrade of Gabčíkovo Locks“ are upgrade of upper and lower gates, innovation of filling and emptying system and creation of expert control system. The Project has been co-financed by the Connecting Europe Facility at the amount of 85 % (almost 123 million EUR without VAT).

“The author is solely liable for information used in the article. The European Union assumes no liability for any information given therein.“

Temporary navigation restrictions for Gabčíkovo Waterworks modified by Vodohospodárska výstavba after negotiations with European transportation companies Cyclical interruptions of navigation is a security precaution for the waterworks and workers during upgrade of lock chambers2020-10-172020-10-21http://gabcikovolocks.eu/wp-content/uploads/2017/06/logo_gl_big_1.pngGabcikovolocks.euhttps://gabcikovolocks.eu/wp-content/uploads/2020/10/joj-e1603279602672.jpg200px200px
The sole responsibility for the content of this publication lies with the authors. The European Union is not responsible for any use that may be made of the information contained therein.
Copyright - Upgrade of Gabčíkovo locks project. All Rights Reserved © 2017