Thousands of ships have been sailing through Gabčíkovo locks for more than twenty-five years. The locks must be completely renewed in order to provide their functionality, security and fluent sailing on the Danube. Construction works under the project of “Upgrade of Gabčíkovo locks“ have been launched today by symbolic tapping cornerstone by representatives of environmental, transport authorities, European Commission and the general supplier of works.

“The locks have been used by more than 400 thousand ships. They have been filled more than 100 thousand times. This procedure has resulted in leakages endangering the operation. Currently, the locks are at the end of their life cycle. Therefore, their innovation and modernization are vitally important for the ship transport both in Slovakia and in Europe – this is how we and representatives of the European Union perceive it“, said Mr. Daniel Kvocera, Director General of VODOHOSPODÁRSKA VÝSTAVBA, ŠTÁTNY PODNIK ( VV, š. p.), and added that this works would be the first big locks revitalization since the beginning of the commissioning in 1992.

Revitalizing works will be running under the full operation. The works will start with modernization of the right lock. Upper and lower gates – each of them weighting several hundreds of tons – and their accessories will be exchanged. Filling and empting systems will be innovated. Regulatory locks of drainage outlets and inlets ensuring closing and opening of filling channels for filling and drainage of the lock will be innovated. Construction security will be endorsed by the advanced stabilization of the whole underlay of the locks. An expert control system will be introduced in the Gabčíkovo dam and it will ensure the advanced control and management of the ship transport.

The project of “Innovation and Modernization of Locks for Enhancement of Security and Intensity of Water Transport in Gabčíkovo Water Structure” belongs to the greatest river transport projects in the European Union.

„Today we add another chapter to the history of this important water construction which ensures the more continuous and more secure transport – apart from its anti-flood function and pure power generation“, said László Sólymos, Deputy Prime-Minister and Minister of the Environment of the Slovak Republic.

The project of “Upgrade of Gabčíkovo locks” is being co-financed by the EU-funds. 122. 965. 250 EUR were granted from the Connecting Europe Facility CEF approved in 2016.

The stock company Metrostav a.s  had won the international public tender and became the general supplier of works. Construction works will be supervised by the Gabčíkovo water association Združenie VDG – Plavebné komory and represented by the stock company Dopravoprojekt a.s.

Launching modernization of Gabčíkovo locks also means another milestone of the project “FAIRway Danube”, which is the first stage of the implementation of the “Master Plan for Rehabilitation and Maintenance of the Fairway on the Danube and Its Navigable Tributaries”. The Master Plan was approved by transport ministers of all Danube countries in December 2014. Its goal is to achieve and ensure good sailing conditions the whole year round providing minimum services. The pilot operation of ranging vessel and measuring vessel was launched today.

The Slovak transport and construction Minister Arpád Érsek is of the opinion that the current state of Gabčíkovo locks and adjacent sections of the fairway disables the full operation and sailing security: “The Danube is our most important fairway. Therefore, we must ensure the operation which is reliable and secure for the water transport. I am glad that we were successful in getting financial means necessary for revitalization of the locks and production of vessels ensuring navigability. I am confident that we will successfully implement this project“, underlined the Minister of Environment and Construction.

FAIRway Danube is implemented by six co-operating countries: Austria, Slovakia, Hungary, Croatia, Bulgaria and Romania. The project is being co-financed by the CEF (Connecting Europe Facility) of the European Union in the amount of 19,6 million EUR, for Slovakia in the amount of 3,2 million EUR. 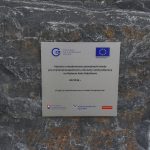 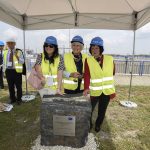 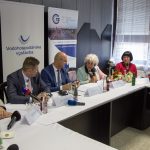 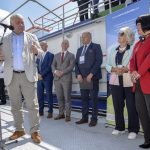 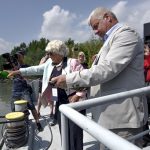 Life cycle of Gabčíkovo locks is over. Water management has launched their upgrade2020-03-052020-03-05http://gabcikovolocks.eu/wp-content/uploads/2017/06/logo_gl_big_1.pngGabcikovolocks.euhttps://gabcikovolocks.eu/wp-content/uploads/2020/03/ram0929-e1583407731880.jpg200px200px
The sole responsibility for the content of this publication lies with the authors. The European Union is not responsible for any use that may be made of the information contained therein.
Copyright - Upgrade of Gabčíkovo locks project. All Rights Reserved © 2017